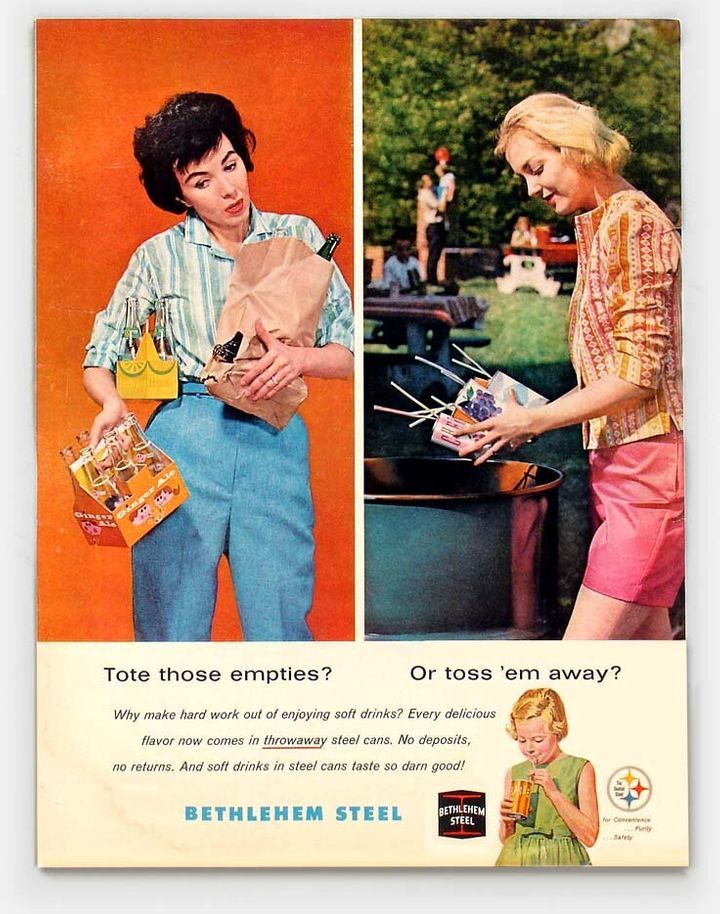 How did we go from a culture that used everything until it wore out and fell apart, to one that throws an entire razor away when it's dull and buys $9 t-shirts that rip and have to be disposed of within months?

Our modern culture has brought many improvements to our lives, but some changes are not necessarily better. Ad campaigns, in the 1950's in particular, praised the progress of society with its newly available disposable consumables. Going on a picnic? Just throw everything away when you're done! Everything became cheap and convenient. Just toss and go.

In our desire for less expensive goods and company profits, jobs and manufacturing have been pushed overseas, and we have fallen further and further still into a culture of cheap disposable goods.  Instead of looking for quality and paying for things that will last, we compare many products soley on their prices. We even buy snacks that have been in weighed out into servings in individual bags, rather than dividing them out at home using our own reusable containers.

This shift in consumer priorities has led to an explosion in our waste production as a society. Americans now create, on average, 4 and a half pounds of trash each... every day. This has led to problems with landfills filling up far faster than originally estimated, garbage ending up on streets, in waterways and eventually polluting our oceans.

A shift in our mindsets and our consumer habits will go a long way towards solving this problem.

Small Steps to Start Us Off!

Here are some simple ways to start reducing our waste:

Stores that sell food stuffs in bulk are a great resource in decreasing the packaging waste on the food you buy. We can check our local stores ourselves, or use the Bulk Bin Finder below to get started.

Once we have some basics under our belts, we can try some bigger changes that may take a little more planning, and a little more adjustment of our expectations.

While most of us will never get to the point where we can fit a years worth of trash in a mason jar (see video below!), we can all make some amazing progress towards cutting our waste production by leveling up to bigger changes.

We have always been told to recycle, that it is a great way to be kind to the earth. And while recycling is an important piece to the puzzle, there are some important things we should bear in mind.

It's important for us to remember that recycling is a business and it only works when materials are valuable enough to be in demand to keep the system moving.

We need to make sure we educate ourselves on what our local recycling system accepts, and what it doesn't. Find out if there is a drop off station for some harder-to-recycle items.

And don't just throw something in the single stream bin hoping it will get recycled. We may feel like we're giving that item "a chance" at being recycled, but in reality it almost certainly won't be and may actually end up contaminating an entire batch of material, forcing it to be tossed into the landfill. Items like plastic bags should never be put into single stream bins as they shred and tangle up recycling machinery, often causing the entire plant to be shut down for cleaning.

When in doubt, Leave it Out!